What have U got planned this festival season?

Adelaide’s arts and culture scene thrives year-round, but there’s really no time like February and March in the city.

The Fringe Festival is well underway and the Adelaide Festival opens on 28 February. Offering world-class comedy, theatre, cabaret, dance, visual arts and much more, festival season truly offers something for everyone – and all within a short walk or tram ride of U City. Even if you can’t make it to a show, there’s plenty of opportunity to enjoy the festival atmosphere in the city and surrounds. 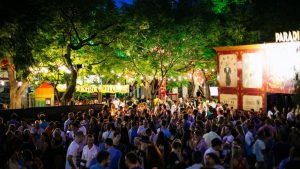 If that’s not enough arts and culture to whet your appetite, WOMADelaide is held for four days over the weekend of 6 March. And don’t forget the packed programs still to come this year from groups such as the State Theatre Company, ASO and State Opera.

If sport is more your thing, the Superloop Adelaide 500 is on from 20-23 February. Footy season has already kicked off, with the AFLW competition running until the end of next month, and the first match of men’s competition at Adelaide Oval on 21 March.

With this thriving arts, festival and sporting scene, Adelaide is one of Australia’s most cosmopolitan capital cities – one packed with eateries, cafés and bars, and the largest fresh produce market in the southern hemisphere.

Imagine having all of that and more right on your doorstep at U City.

It could be so U.