Connection the key for U City’s new residents

Downsizing has a whole new look at Uniting Communities’ U City building in the Adelaide CBD. The top six floors of the brand-new 20-storey building on Franklin Street are offering retirees an amazing new lifestyle, right in the city.

But for residents Pam and Chris, U City is proving much more than just a place to retire. The couple moved into their apartment in August, after living on a large property in the Adelaide Hills for 13 years. 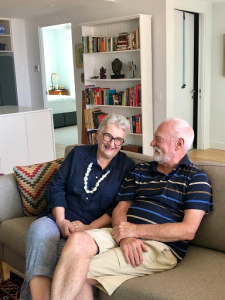 ‘Initially, I was worried about missing the connection to the community that we had at home,’ says Pam. ‘But from day one, the sense of community at U City has been extraordinary.

‘We looked at a number of places, but really felt a strong affinity with what U City offers. There’s a wonderful culture within this building and among the people moving in. I think this is very much down to the culture of Uniting Communities.’

Adds Chris, ‘We’re loving meeting the other residents here and joining in with the various activities going on around the building.’

The city location, the expansive views and U City’s green credentials also factored into the couple’s decision.

‘We’re right in the heart of it now – just down the street from the Markets – and we can’t wait for Her Majesty’s Theatre to re-open soon,’ Chris says. ‘We’ve been dining on Waymouth Street, Leigh Street, Peel Street… it’s all so close by.’

Pam says, ‘And we’re very interested in playing our part to protect the environment, so U City being a recognised green building appealed to us as well. We’re walking everywhere now, and catching the tram and buses too, so we may even get to the point where we don’t need the car.’

Above all, Pam and Chris believe that U City will give them plenty of options to age independently and in a modern, well-equipped home, surrounded by a strong network of like-minded people.

‘Quite a few of our friends have been surprised by how different retirement looks at U City’, says Pam. ‘It doesn’t in any way fit the traditional idea of what retirement living is like. It suits us and our future plans perfectly.’

CONNECT WITH US
Are U starting to get that festive feeling?News
A new level in accessible accommodation in the city – and you could win!News